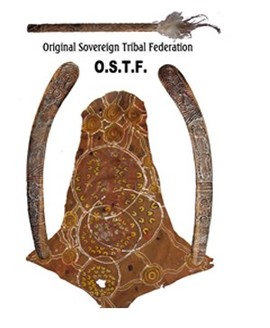 A major purpose of the Original Sovereign Tribal Federation is to unite Original society nationally. This purpose comes about through the vision to re-dignify relations with self and between genders and clans.

“National unity through the OSTF provides a foundation for practical, ethical and cultural practices from which to reach out to non-indigenous society.”

Underlain by the cultural responsibilities of Original Law that has been the stabilizing force of Original society for ten’s of thousands of years and the support of Ancestors who have gone before, OSTF enables a development of cultural law to uphold a new paradigm of caring for people and country in this post-modern era.

The OSTF is on the edge between traditional Original society and postmodern Australian society. The ‘Edge’ is a term for a transition zone between, for example, ecologies, cultures, paradigms, trade or geographical boundaries. In ecological terms, the edge is the place that is richest in species, habitats and interactions because it is the interface between two environments.

The Original Sovereign Tribal Federation is poised on an intercultural boundary, rich in possibility for the development of modern Original culture as an integral part of a holistic vision for all Australians.

A catalyst for the OSTF is the discontent arising from numerous, ineffectual assimilation policies perpetrated under British Sovereign law, since the illegal settlement of Australia by Britain over 200 years ago.

Ineffectual from an Original viewpoint because the patent disregard of settlers towards the oldest continuous culture on Earth; born of ignorance, self-interest and avarice, produced tragic hardship, inequality and abasement of the physical and cultural dignity of a whole people.

Ineffectual from a settler perspective, because the British and Christianizing agendas have failed to assimilate the traditional Original culture.

While thousands of scholars, governmental and non-governmental representatives have worked for decades, and billions of dollars have been spent, on researching, studying and planning numerous solutions, policies and practices, the intercultural edge remains chaotic and unsatisfying for both settlers and Origines.

Intractable problems and issues regarding rights to land/country, health, representation and cultural expression continue to abrade national moral integrity. Degradation of spirit abounds on both sides of the cultural divide.

National Original unity through the OSTF Treaty provides a foundation of practical, ethical and cultural practices from which Original society can reach out to non-indigenous society and take its place as a vital and invaluable contributor to Australian society and the global community.

The stabilisation of Original society by its peoples, feeds country, re-vitalizes relationships and re-dignifies life. As this renewal of country and peoples occurs, the cultural re-empowerment filters across the intercultural boundary, changing attitudes and behaviours in non-original society by osmosis.

OSTF would like to extend an invitation to your community to provide a venue and receive OSTF on behalf of your local community so as to inform our traditional elders of the sovereignty process currently being offered around remote parts of this continent.

Please view the work OSTF has been involved with recently,  as documented by Mirrial Arc-Hive Media  the Production and Archival arm to OSTF which has been filming and documenting this historical process.

OSTF is eager to establish contacts in remote locations and communities with the result being that there will be a community host to receive OSTF.

With community support we are hoping to establish bloodline connection to country so as to create a Treaty with OSTF to assist in reconvening of parliaments on traditional lands.

Should you know of relevant bloodline elders and/or event organisers to deliver this important message of freedom and opportunity to reconvene tribal parliaments.